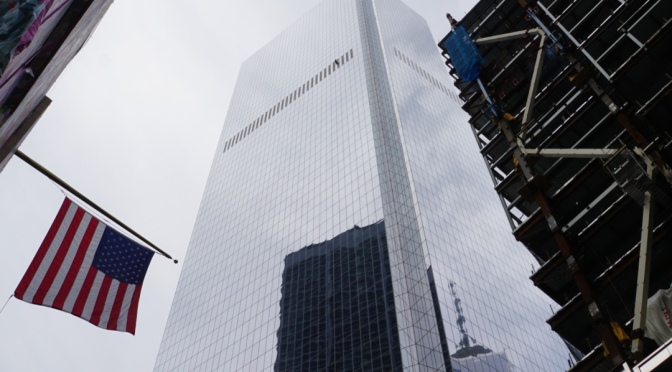 We arrived by train the day before yesterday and walked the 4 blocks from Penn Station to our hotel on 37th St.  By the time we had arrived we knew we had too much stuff, but what can you do – if it fits in the bags it comes for the ride. The traffic for a Friday was what we expected.  Only that is not true – I had no idea what I was expecting, and so I enjoyed every aspect of the scene.  Even the grime, the aged tiles in the station, and the homeless pregnant girl on our corner.

The noise was an assault on the ears but, at the same time, exhilarating.  I know this place has been done to death in movies for decades but the reality is different, yet not. I am enjoying the constant noise, split between muffled sounds that filter through the thick glass in our room, past the double blinds and my ear plugs.  Actually its not noisy in our room.  We hear sirens , but 8 floors up we are off the street, well and truly – as my mother would say.

We went back to Penn Station and headed to Lower Manhattan to the Financial District towards the 9/11 Memorial.  Very confronting and saddening.  I looked at the pictures of some of the people who had died and their employers were listed on screens near one of the memorial pools. We signed the wall in the street along with thousands of others. I took a photo.

We then walked to a new shopping centre called Brookfield something and on our way we passed thousands of runners who had been involved in a Tunnel to Bridge run.  Every type of personnell were represented. Firies, Nurses, Police, Army, etc It was amazing!

After this photo we went to the new Westfield where “millions have been spent on it” We saw three coloured polished marble tiles and sweeping stairs.  There were about 15-20 metre tall living palms too, inside the centre. Beautiful.

After our snacks with a view of the water – we headed to Wall St, then the Bull and then to Staten Island and back.

<–The street names make you smile.

Dont know if I will eat the offerings here but one could I’m sure.

The little bull with the Big Bull.—>