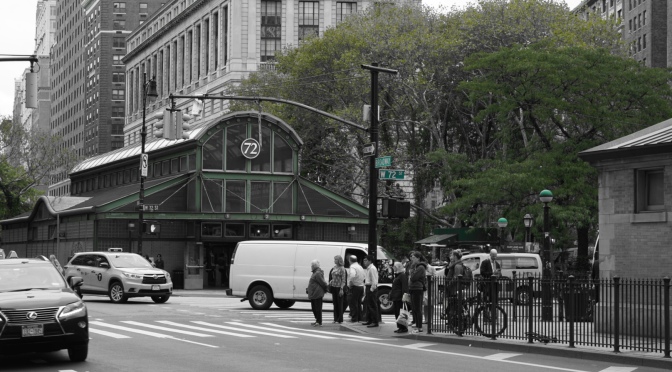 We were a few sights short and as I was travelling with a foodie in Didi – I decided we should use our Metrocard (Bought it for use on trains and buses for a week and it earned its keep – big time!! – great investment)

So we headed for Broadway and 80th Streets to the famous Deli called Zabars!!!

We caught the M7 bus and it was heading in the right direction.  It takes ages to get from one place to another on the bus, but the views in and out of the bus are worth it.  Its nice just to sit back and watch the world go by, especially when it is so frenetic where we have been staying.  The noises are continual, jarring, educational and interesting.  We watched as emergency vehicles with their woop woop noises which were blasted at street corners.  People pay them very little attention – I saw a guy walk across in front of a turning ambulance today – he hurried a bit but the van had to wait for him to get out of the way. Unbelieveable!

Anyway we sat on the bus and watched the people, like the woman with the trolley basket, she hugged to her knee in the middle of the aisle.  There was a seat nearby which was a single seat with a space beside it where the basket could have gone perfectly.  Eventually she worked it out and moved.  Another women, young and huge sat down on my right across the aisle and the seat groaned. She had the most perfect skin, and was probably only about 20 if that. Later a woman in orange got on with a walker and a 4 pronged stick lying across it.  She approached another woman on her right and asked her for the seat.  There are signs everywhere and constant announcements about giving up your seat for the elderly or disabled. Anyway as she approached and asked for the seat to be relinquished, the owner said “Ma’am, I’m disabled too!” but did get up cross the bus and sit down.

So we are heading for 80th and Broadway but end up one block east of where we want to be.  So we cunningly – after Didi’s suggestion, asked a courier – where we should be for Zabars.  He told us and off we went.

As per the recommendation of the Lonely Planet guide – it was everything and more.

Upstairs was a kitchenware area and the stock was phenomenal.

We had been told again in the guide that there were Knishes to be had here and that if we wanted a real one this was the only place to get the authentic ones. They are round pastry covered snacks.  Inside there is generally potato and another vegetables.  Eg, spinach, brocolli, or mushroom.  They are served hot and taste delicious.

The weather has been  cooler than usual and there is rain coming.  Its a little cooler but not unpleasantly so. Went all retro and mono today and took some picture of the area we were in.  Much more ‘mellow’ from 50th street north, in Manhattan.