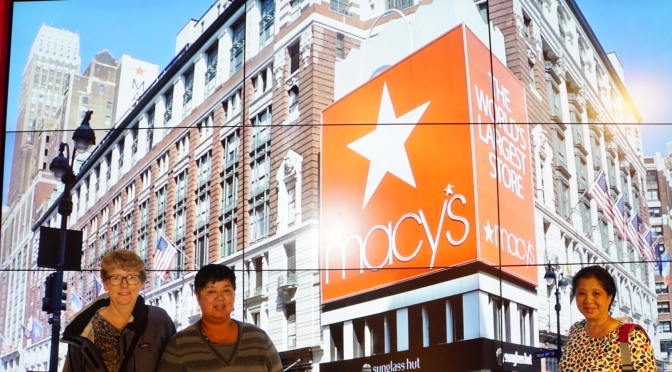 We have been having breakfast at our hotel and today I tried the 'oatmeal'. It was beautiful..They had three containers of 'sprinkles'. There was sugar, sultanas, and  slivered almonds.  There was also cinnamon and another something that I cant remember but had not used. Very yummy.

Today was the first day we have used our raincoats and we needed them for the 3 block walk to Macy's the worlds largest store.  Amazing place and the range of stuff in terrific. The temperature has dropped a little but its refreshing. Not a problem.

After we had been there for a while we needed to eat of course so we went to a lovely restaurant on the 6th Floor called Stella. Then of course we needed sweets afterwards – well I only had roast chicken soup so I was not full. So we found  Bon du pain – a pastry smorgasbord! Yummo !

After we had been to Macy's we walked home and I wanted to go into the Post Office to see how much it would cost to send home some of my paperwork.  One does collect a lot of crap along the way and I love maps so have heaps.It was raining quite softly but consistently and it was getting colder.  Found the prices were to high so have managed with the cases I have.

We are heading out to Washington tomorrow by train so after arvo sleeps and blog time we are packing.  Dont know how we are going to fit all the crap into the bags we have.  Sigh,  but I do like a challenge.

We've had a great time in New York and there is so much more to see and experience. Looking forward to doing it again in the future – may have to win lotto though.