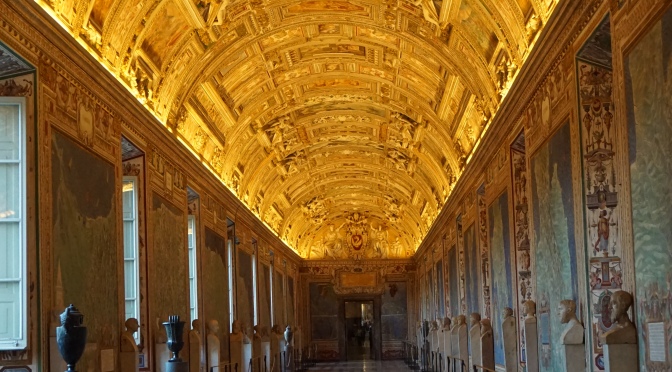 The Vatican Museums are Christian art museums located within the city boundaries of the Vatican City. They display works from the immense collection amassed by popes throughout the centuries including several of the most renowned Roman sculptures and most important masterpieces of Renaissance art in the world. The museums contain roughly 70,000 works, of which 20,000 are on display, and currently employ 640 people who work in 40 different administrative, scholarly, and restoration departments. Wikipedia

We paid top dollar for the privilege of getting in to see the Sistine Chapel ceiling and doing that at 7:30am before the general public. It was worth it.

We were given instructions to meet on the stairs across the road between two places, a restaurant and a pub. We thought,”how will we find the guys in blue we are supposed to meet?” but we did, along with about 30-40 other people who had done the same thing as us. We booked on line through YourGuide.com

We were divided into groups and had chosen a one hour tour before we had free reign in the museums for the next 6 hours if we wanted it. We joined one of those groups we saw all over Florence following talking guides with poles with flags or scarves or teddybears on top.

We were given green headphones and a blue plastic receiver with a green lanyard attached which we hung around our necks. It was quite comical with the allocation of who went with which guide and then all of them trying to get going first. We were in the first group after a group of 2 people and their guide ahead of us in a private tour.

Our guide, who’s name escapes me, was thorough and knowledgeable with photos to show from a folding picture collection and an ipad. He had humour and was able to answer any question asked of him. He had a lovely sense of humour.

We went into the Museum building which was revamped and remodelled for the millennium in 2000. The stairs, that take us to the first level, were a long curving marble staircase. There are paintings and all the security you would expect. We collected our barcoded tickets and fed them into the turnstiles. Then we began the long walk to the Chapel. We passed a lot of artifacts and paintings from various centuries ago. There are no photos allowed in the chapel itself and you have to be very quiet and respectful. We arrived and they turned out the lower lights and then turned on the ones which shine towards the ceiling.

We had had a little incite into the politics of the day and how well regarded Michelangelo was at the time and how much contempt he had for the establishment at times. Very interesting and to see the ceiling was amazing and to think it has been there for 400 hundred years. It’s mind boggling that it has survived so well.

This is the amazing spiral staircase in the Vatican museum in Rome, Italy. This double helix staircase was designed by Guiseppe Momo in 1932. This looks like one big spiral staircase but, in fact, it is two spiral staircases … And magically enough, when two persons use the different sets of staircases at the same time, they can see each other going up or down, yet never meet. Google 27-10-2019

After about 9:45 we left the museums having been amazed and impressed by the huge collection, including some moon rocks given to one Pope by President Nixon. We were fed through our third gift/bookshop before we found ourselves wandering down the spiral staircase at the exit.

We spoke to a guy before we went to St Peter’s who told us where the bus stop was to catch the bus. He said it would be an hour before the bus returned so we had time to go to the St Peter’s.

Once at St Peter’s we watched the people queueing to get in and then we took a selfie – entitled, “Guess who’s in Rome”. We had a lovely time and then headed back for the Hop on Hop Off Bus. We chose the Green Line – our hotel, Hotel Rimini, said we would get a discount. Would have had the same discount wherever we went because everyone knocked €3 off the price on the brochure.

So we toddled off to the Basillica along a very well worn footpath around the outside of the vatican museums with towering walls above us to St Peter’s and then came back, and on the way back we were approached by a guy who gave us a route map of the HOHOBus and said there was an office to buy our tickets and he waved in a general direction. We thanked him and then bought a bottle of water from a food van and headed back to the first guy. As we approached the traffic lights to cross over to go to the bus stop another spruiker approached saying he was a volunteer and he would get us tickets on the HOHO Bus. I said we have an arrangement with another guy over there, pointing to the side where the bus stop was, but he kept coming and saying how much we would be paying and how he would give us a discount to €18 – which was the same price as the first guy. So once we crossed the road I said again that we had an arrangement with “him” pointing to our guy. Then they go into a battle about who was who’s client. We walked purposely to our bus stop and left them to it.

Anyway ,we got on and had a marvellous time, and took thousands of photos and I tried to get all arty, and took some in black and white.

It was a lovely restaurant with good food fast and for a reasonable cost, but beware they charge for the bread sticks/basket so if you dont want it tell them. Ivana was our main contact there, she was really helpful and spoke English and we got by with some Italian.